Welcome to the Dari Delite, Home of the Hershey Burger

Mention Hershey Burger to anyone who lived in Muleshoe from 1954 to 1980, and you will get a delighted, surprised look, a smile, and a comment about how good a Hersey Burger tasted. And if you let them, they will also talk about the Bertieburger and the Twin Dog and tell you how great they were.

As far as I know, Muleshoe is the only place that can lay claim to the Hersey Burger, dreamed up by Bertie Purcell, proprietor of the Dari Delite Drive-In. 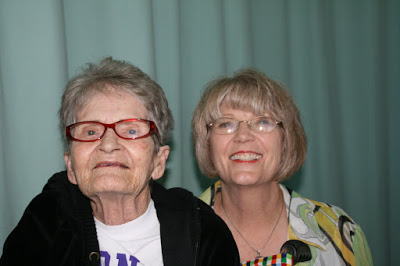 I finally had the chance to find out first hand just what all the fuss was about when I went to Park View Nursing Home here in Muleshoe to visit with Bertie herself, along with her daughter, Pat Purcell Young, who is also a friend of  mine. Pat had worked at the Dari Delite as a teenager and was very well-versed in the dishes that made the place a landmark. She was also very proud of her mother and the notoriety she had earned with her meticulous attention to the food she served.

Bertie Mae Seales, who was born in 1926 in Roaring Springs, Texas, came to Muleshoe in a covered wagon when she was about three months old, so she has been here a long time, 83 years to be exact. She opened the Dari Delite in 1954, and it stayed open until her husband, Vennie Purcell, died in 1979, and  she closed the order window in 1980 after 26 years of delighting customers with her specialty dishes.

The Dari Delite building had been a drive-in before Bertie ran it. McDonald’s may think they are modern with their drive-up speakers to place orders, but the Dari Delite had the very first one in town. Pat said people would drive up to the window to place their order and then drive around the back of the building to the other side to the pick-up window, and off they would go with their treasure of tasty food. Bertie did all the cooking and preparation, and Pat, along with one other person, would take the orders and hand them to the customers. It was a good system.

So, now the part you’ve been waiting for-what in the world is a Hershey Burger, anyway? Bertie would take a cinnamon roll from another eatery tradition in Muleshoe, the Spudnut Shop, a donut place that made donuts with potato flour, and slice it in half lengthwise like a hamburger bun. She would place a whole Hershey’s chocolate bar on the bottom half of the roll and put the top back on. Then the outside of the cinnamon roll would be lightly buttered, just enough to keep it from sticking to the foil it was about to be wrapped in before being placed on the grill to heat. When the top of the foil felt hot to the touch, Bertie would turn it over to finish heating the other side of the roll, which didn’t take long. Then it was taken off the grill, put in a sack and sent on its merry way to be enjoyed by the customer.

Since the Hershey Burger was dessert, the Bertieburger or Twin Dog made excellent main courses. The Bertieburger was a hamburger laced with Bertie’s special chili, ham, and cheese. When Bertie became a resident at Park View two and a half months ago, Bruce Purdy, a Muleshoe product who is now her doctor, made the comment that considering how many Bertieburgers he ate growing up, he certainly wanted to take good care of Bertie now.

And then I have watched our friend Joe Bob Stevenson describe the Twin Dog, all the while salivating at the memory of how good they were and  how he lived on them when he worked at King Grain, especially during the harvest when it was nothing, he said, at 8 or 9 at night to order burgers or dogs for the crew working late. The Twin Dog was a hot dog with the wiener sliced lengthwise and then cut in half so that there were four pieces of wiener to lay out on the open bun, then covered with mustard, chili, onion, and cheese.

This chili must have been what made the difference because it seems to have been a main ingredient on everything, well, except the Hershey Burger. It seems Bertie’s grilled cheese sandwiches even had chili and onion on them. Pat said her mother was glad to share recipes of how to put together her dishes, but the chili recipe was never given out. Even to Pat.

One other thing the Dari Delite was known for was its lemonade and limeade, which was sweetened with what Bertie called simple syrup, made with ten pounds of sugar dissolved in hot water. One squirt was added to the small drinks; two squirts to the large.

The Dari Delite was located on the corner of the Plainview Highway and East Ash, across from King Grain. The building was moved in 1981, and now nothing stands as a monument to the legendary drive-in but its utility pole, all alone in the middle of a vacant lot. But the Dari Delite and its delectable dishes will always survive in the memories of the many people who ate there.

I would have attempted to duplicate the Hershey Burger process so I could taste it and also have a picture of the finished product to show you, but since the Spudnut Shop is no longer around, which means the cinnamon roll just wouldn’t be the same, I decided to not mess with history and let you imagine it in your mind. But one of these days, I will have to try it so I, too, can brag of the experience of eating the celebrated Hershey Burger. The Bertieburger and Twin dog I might also try, but there again, with none of Bertie’s special chili, my attempts will pale by comparison.

According to an Associated Press article in the Lubbock Avalanche-Journal*, Americans seem to be on a quest for a better burger, so it sounds like what the world needs now is another Dari Delite.