We flew into Baltimore last week to visit Washington DC and later New York City. I have pleasant childhood memories of riding the train from Rosenberg to Ft. Worth where my grandparents would pick me up for a summer vacation with them in Olney. So to add to the list of the many experiences we expected to have on this trip, we chose to ride the Amtrak train into both cities. Riding Amtrak provided us with more than we had bargained for. 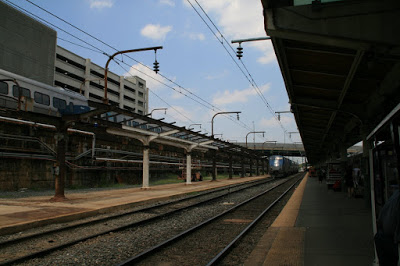 Amtrak Station
The whole thing started when we landed in the rain at Baltimore Washington International Thurgood Marshall Airport (BWI)  and had to wait about twenty minutes before they were willing to open the door to connect to the concourse, because of equipment getting wet, I suppose. This of course shortened the hour we had planned on  to catch the shuttle and make it to the Amtrak station for the forty-minute trip into DC. That station was a real let-down, small, poorly arranged, dark, crowded with people and shrouded in a cloud of disenchantment. The two employees behind the enclosed glass office didn’t seem particularly happy to be there and weren’t getting into any hurry to help anyone. Bill tried to access the Amtrak automated ticket machine with the bar code on the reservations we had printed off the website, to no avail, and wasn’t real happy by the time he finally got tickets from the sullen woman behind the glass. Then we had to rush through construction to find the right train, which we had just missed, and boarded another one going to the same destination. It was full and the three of us-Colten went, too-had to sit wherever we could find an empty seat. Which is not always a bad thing, since talking to people from other places is usually interesting.
We had not gone but a mile or two, once we finally started, late, when we rolled to a stop and sat there. And sat. And sat. Finally the intercom came on, and we were told there was trouble up ahead because of the storm that had blown through, the same storm that had delayed our disembarking from the airplane. Then there were other obscure announcements, more sitting, and occasionally some minor movement of the train. And more sitting. 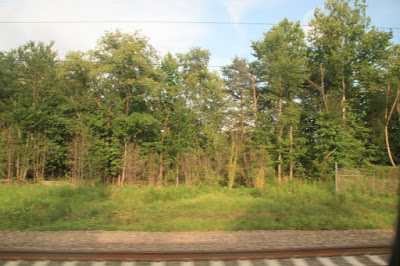 The not so pretty trees we looked at for four hours.
Eventually we were told the storm had knocked out the power up ahead and in DC and they couldn’t run the trains because the signals were out. By now the noise level rose and the patience level fell as we realized we would be stuck in this train for no telling how long. It got hot. Rumors circulated as to when we might finally be moving again. Apparently the man serving in the cafe car suffered the brunt of the complaints about the situation, over which he had no control, and in desperation started handing out free soft drinks trying to keep tempers down. I learned all about the family of the man sitting next to me, who happened to be from San Antonio. Colten said the man behind him answered a call on his cell phone with the greeting, “You have reached Hell.” There was no view from the window to help entertain or distract us because we were looking at a wall of not very pretty trees. Considering I had heard other stories about Amtrak trips run amuck, I began to question our decision to ride the train and was not looking forward to the other three times we were to be on it.
Our forty-minute train ride turned into four hours, but I will have to say once we started rolling, it was nice and fast. The scenery wasn’t the greatest-I was expecting to see more countryside, I guess-as the tracks went through the less than scenic parts of the cities, as most train tracks do, but it was still interesting. And really fast. 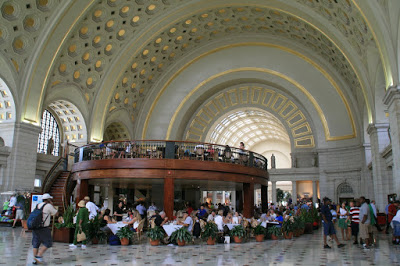 The lobby area of Union Station in Washington, DC. We ate at this restaurant on the return trip. 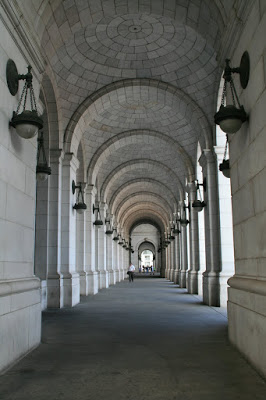 The front corridor at Union Station. 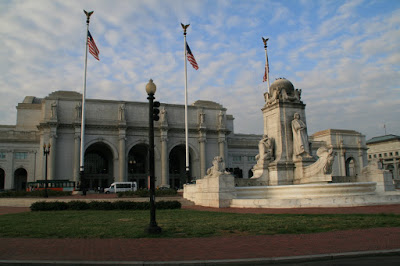 The front of Union Station.
But Union Station in Washington, DC, made up for the puny, unpleasant little cubby-hole we started with. It was beautiful, spacious, and massive, like all the monuments and government buildings we saw for the next two days.
In all fairness to Amtrak, I will have to say that the storm that caused all the trouble really had been a pretty bad one, as we watched on the news that night all the coverage of downed trees and intersections with no traffic signals, and other havoc wreaked by the storm.
Two and a half days later, the ride from Union Station to Pennsylvania Station in New York made up for that first ride in Hell. We had no trouble boarding for this ride, and we discovered they have something called the Quiet Car, and they meant it. No cell phone conversations, no loud talking, no acting stupid. It was really nice. This time we left on time and had no delays. And we all sat together. A fun part of this ride was traveling through five states on the way to our destination: Maryland, Delaware, Pennsylvania, New Jersey, and then New York. 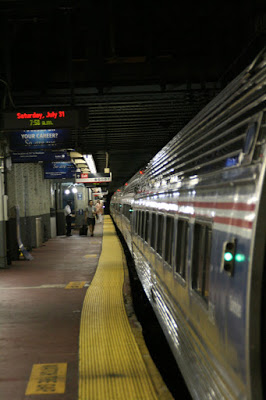 When it came time for the trip back to DC and on to Baltimore to catch the plane for home, we were seasoned travelers (not!) and knew to get on the Quiet Car, which we were told was at the end of the train. So we rushed to the last car and settled in smugly, proud of ourselves for knowing what to do this time. We noticed that the space between seats was wider, but it didn’t register with us why the seats were more spacious until the conductor noted on our tickets that we were traveling coach and this was the Business Car. So we had to move to the next to the last car to ride in the Quiet Car.  As we were making the move, I noticed that both cars were neatly labeled, if we had just bothered to read… 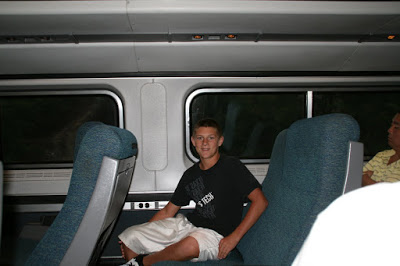 Colten in the Quiet Car.
So in all fairness I will have to say that after our escape from that very first experience with Amtrak, it wasn’t bad at all. Wonder what the chances are of Amtrak running a shopping special from Muleshoe to Lubbock?