The Ace of Cakes came to Muleshoe this week to help celebrate the new police station and the police force’s  Best Practices recognition from earlier this year. Mostly Chief Brian Frieda is a huge fan, as he put it, and he talked to Janet Claborn, director of the Muleshoe Economic Development Corporation, who talked to the Texas State Film Commission, who finally pulled it off. Duff Goldman and  his Charm City Cakes crew drove an RV all the way from Balitimore, Mayland, and spent three days in the MulePlex, visiting the Heritage Foundation, taking a filming tour of the city, shooting at the gun range, and managed to eat at the Dinner Bell, Mom’s, and Leal’s. Oh, yes,  they all took a ride on a mule, thanks to Gary Morris and Dale Griswold,  a most appropriate activity if one is visiting a city called Muleshoe. Apparently the Ace thought so, as this was one thing he requested to do while here.
Who is this Ace of Cakes, you might ask? I had to. I have never watched the Food Channel, since it was not offered on our cable package, but the rest of that story is that I still have not watched it now that we are on Dish. But I plan to, just so I can see why Chief Frieda is such a fan. I was told Duff Goldman has done this Ace of Cakes thing for about four years, but has been a chef much longer.
I was not around when they all went to the gun range, but I did make it over this morning to see the mule ride. Duff and the whole crew were also supplied with straw cowboy hats for a more authentic experience at the Good Times Arena. Duff had the honor of riding Christian, the white mule; the others rode the sorrel and brown mules. 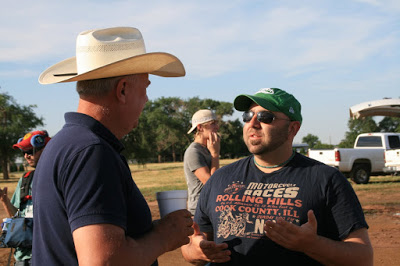 Gary Morris and Duff Goldman at the Good Times Arena. 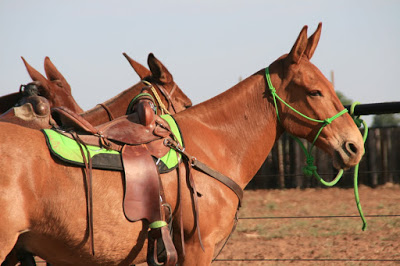 I don’t know who rode this mule; I just thought he looked nice with his matching green accoutrements. 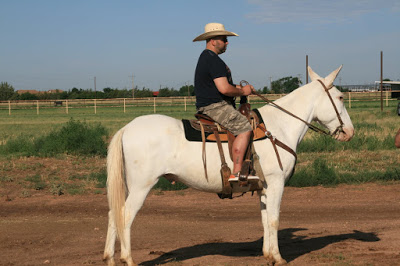 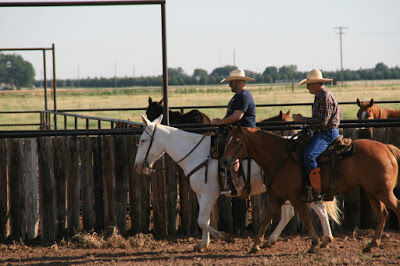 Duff and Dale Griswold ride in the arena. 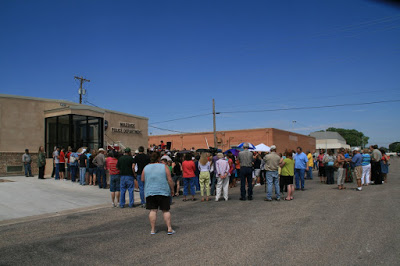 The crowd arrives at the police station.
I arrived at the police station about ten minutes before the festivities were to begin and a nice crowd had gathered, somewhere between two and three hundred people. All that wind we had had on previous days was, of course, nowhere to be felt, and the asphalt became a mite hot. No one left, though. Dignitaries were introduced by mayor Cliff Black: state representative Warren Chisum and his wife Omega from Pampa; Mary Whistler and Jay Ibarra from Randy Neugebauer’s office in Lubbock, and Joe Osterkamp, president of the Muleshoe Chamber of Commerce.  Nancy Cardero from the Texas Department of Agriculture was said to be in the crowd but was not recognized. Mr. Goldman came out to cheers and visited with the crowd. He also conducted a little experiment. He asked us all to put down our cameras and wave our hands in the air so he could see them. Then he broke into a chorus of  “The stars at night are big and bright….” and sure enough, automatically without having to be told,  we all clapped, bang, bang, bang, bang! and sang out “deep in the heart of Texas” to which he was delighted. “It really works!” he laughed. 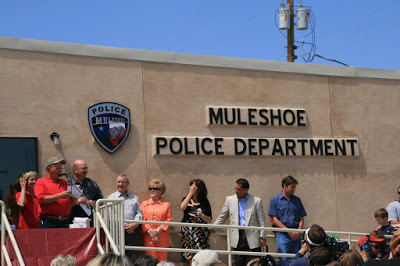 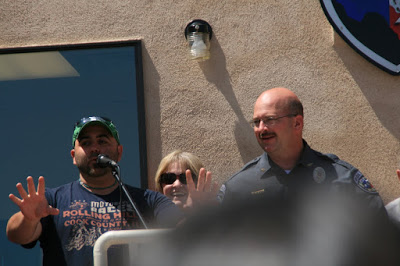 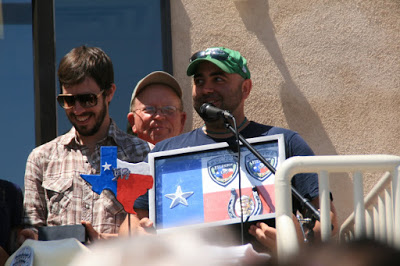 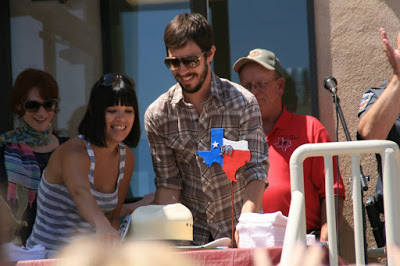 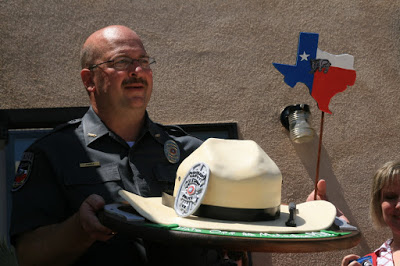 Chief Frieda and the much-anticipated cake.
After many presentations of mule shoes and plaques, the cake finally made its appearance, a mule-appropriate straw hat with a police badge on it. Chief Frieda of course had the first piece and the rest was reserved for everyone in the police station, which was as it should be, as that cake wasn’t going to feed the crowd anyway. Well, with one exception. The Ace offered a piece to Christian the mule, and after some hesitation and lots of sniffing, he did eat it. But everyone else had cake and lemonade served by United. 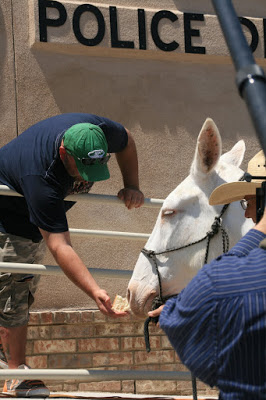 Christian enjoys his piece of cake. 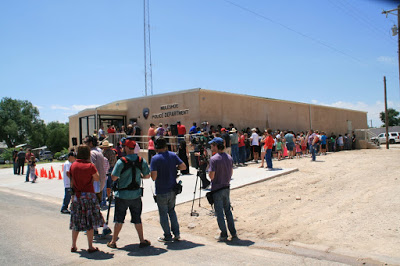 After the presentation, die-hard fans lined up around the police station and patiently waited for their chance at a photo-op with the Ace of Cakes. The Ace of Cakes patiently took the time to let everyone in that line have their picture taken before he and the crew pulled out for other destinations. Janet Claborn was not surprised by this. “He was a pleasure to work with, Duff and his whole crew. They were very cooperative, very nice, nice people.”
If he wants to visit again, I don’t think we’d even make him bake a cake…