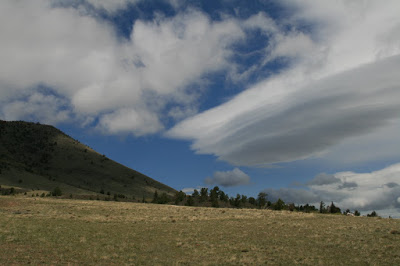 Part of the reason for the Wyoming retreat is to reacquaint with nature, to rediscover the colors of the wind, if you will, that we tend to lose in everyday modern life. So on one ride we were instructed to ride in silence, no talking, so that we could see, feel, and hear the things we overlook. It was amazing how hard it was to remind ourselves not to talk, and then when we started reaping benefits from the silence, it was darn near impossible not to make comments about what was being shared with us in our silence. 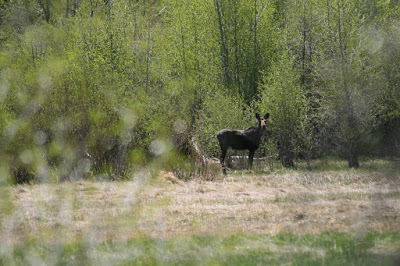 The moose we caught a glimpse of ealier was an unexpected and exciting surprise, and I was able to take a decent picture of it, but there was more yet to come. 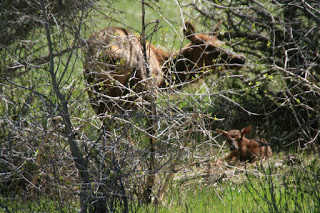 As we rode along the gurlging stream, Tommy’s horse lifted his head unexpectedly and shied away from the water and willows. Malcom’s head came up a split second after that. And there, almost hidden in the brush, still as a statue, watching us was a mother elk and her newborn calf. Her wide eyes followed our movements but she moved not at all. The baby, a small crumpled pile of damp russet brown hair, lay equally still, unaware that he was the object of our curiosity. Sensing the mother’s concern, perhaps, the horses were somehow willing to settle and stand while we admired her and the baby and took pictures. I guess she realized we were not a threat because she carefully lay down beside the calf. who had stood for his very first time and then went back down beside his mother. Respectfully and quietly we left, elated that we had been permitted to witness this gift from nature.
The silent portion of our ride was to begin now. The wind was the loudest thing I heard as it zipped this way and that, making alternating whistling and roaring sounds under the brim of my hat. Occasionally a horseshoe would strike a rock and a metallic sound would follow a softer mashing sound of grass under hoof. The birds would call to each other with a rhythmic whistle and the squeak  and clank of tack would offer accents to their song. As we moved from grass and rocks to the road, the gritty clip-clop on moving gravel was interrupted with the snorts of the horses as if blowing their hoses from allergies.
The sky was blue and seemed to stretch forever over the green mountains that would surely be soft and velvety if I could just reach up and touch them. Up ahead a rabbit glided effortlessly and soundlessly into the bushes, the bobbing white tail the only clue that he was even there before mystically disappearing. As we crossed a small ditch, the steady rhythm of the horses’ hooves on the gravel was replaced with the squishing and sucking sounds of water and mud. 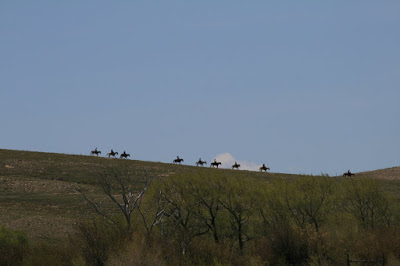 Up ahead other riders came into sight and we were reminded that this reverie was not ours alone and that we would have to relinquish what felt like our sole ownership of this little piece of solitude and take ourselves back to civilization and the group of human animals with which we share it.