I went to Wyoming to ride horses and practice writing. So what did I do that first afternoon when I could have been working on my writing skills in the event the next Great American Novel was lurking about in my head? Why, dig cactus and collect rocks, of course.
My husband and kids say it is an illness, shake their heads in disbelief, go tsk, tsk, tsk, and walk away wondering, What could she possibly want with yet more cactus, and where will she put even one more rock? I, of course, oblivious to their unwarranted concerns, always strike out in search of that perfect rock, that one cactus that needs a safe home in my collection.

Things are no different here on the Vee Bar. I will blame it on Kari, who started it all when she so graciously accommodated me last year when I asked her if I could dig a few cactus and relieve them of a few rocks. The only rocks we have in Muleshoe are caliche, aren’t very pretty, and tend to fall apart. With a little creative packing and a few cardboard boxes, I left last year happy as a pig in mud with my treasures: cactus, rocks, a really neat piece of wood, a shed deer antler, cast-off horseshoes, a railroad spike, a variety of Wyoming wildflowers, and a plan to construct a new area in my cactus garden to be called the Wyoming Bed. 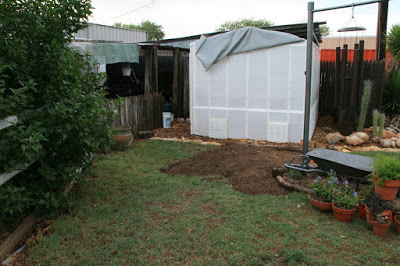 The beginning of the new Wyoming bed, summer of 2009. 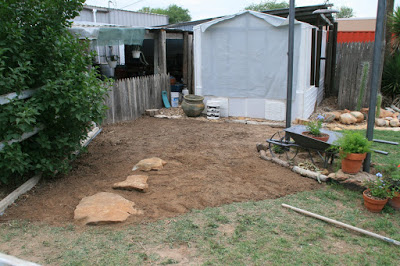 The new Wyoming bed minus anything from Wyoming! The stepping stone rocks are from Coleman, Texas, as Wyoming rocks tend to be round like balls, not well-suited for stepping stones. 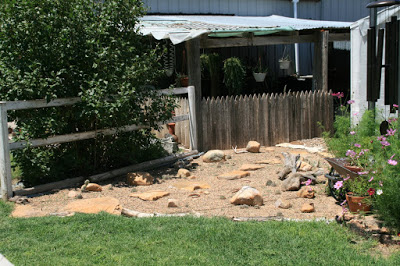 The Wyoming bed, complete with everything from Wyoming in it, 2009. 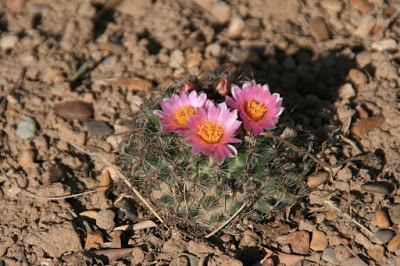 My first Wyoming cactus flowers as they bloomed this spring, 2010.

I dug it, planted it, and was rewarded with all shades of pink cactus blooms this spring. two kinds of artemisia, and some iris that survived our winter. Encouraged by this success, I had no choice but to do it again. 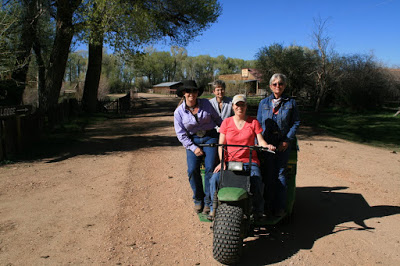 Darcy, Hellen, Alice, Kari driving, on our way for this year’s dig. 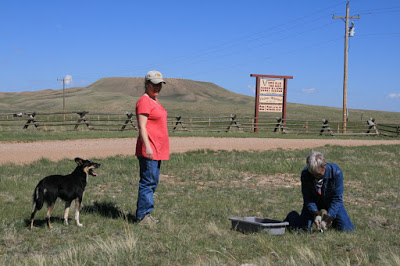 The dog, whose name has eluded me, had a good time, too. 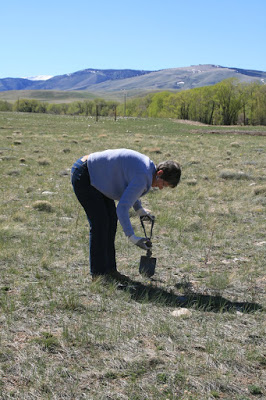 So Sunday afternoon, here I went again, only this time I added two new partners in crime, Hellen and Darcy. The four of us headed out in the ATV and hit pay dirt by the Vee Bar Ranch sign at the highway. We hopped out eager to start filling the heavy plastic trays I had remembered to bring this year. I always travel with gloves and shovel, just for emergencies such as this. At first no cactus were to be seen. But suddenly Kari spotted one and then the race was on. Cactus are funny things- at first they don’t seem to show up, as if they are purposely hiding, knowing they are being hunted, But once one is spotted, it’s like Boom! They’re everywhere! We began to dig in earnest then, and it didn’t take long at all until the trays, all three of them, were full to overflowing, and  I knew I needed to stop before someone had to remind me that I was being greedy and needed to leave some for the other children to find. So I called a halt to the gleaning only to pass three more of the little treasures on the way to the ATV. Well, I couldn’t just ignore them as their feelings would be hurt to be left behind, right? So up they came and into the tray they went. 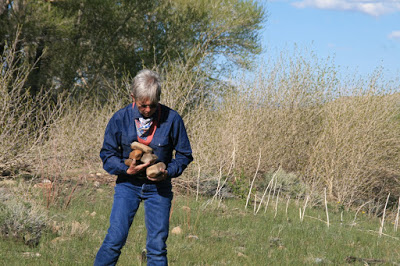 So many rocks, so little time. 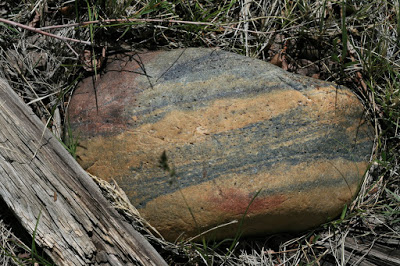 The striped rock where we left it last year. 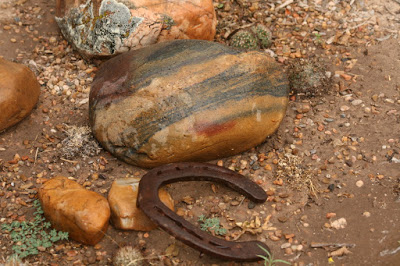 The striped rock as it now lives in Muleshoe.

We took the cactus back to the cabin and struck out this time for rocks, in particular a striped rock we rode by last year, and I turned down Brent’s kind offer to pick up and take back for me. It was a little big for the saddlebag, I thought. But I paid attention to its location with the thought that perhaps it could be retrieved this year. This rock was so distinctly marked I felt like with a little luck we could locate it again, even in all those wide open spaces. Now, I forget stuff I should remember, important stuff. Apparently the location of this rock was important enough to remember because we actually found it! And of course we found others worthy of the trip back to Muleshoe, too.

All was well until it came time to load up for the trip home. We had first planned to take my little Chrysler Sebring, but with Hellen and Jenice being taller than I am and probably appreciating a roomier vehicle and Jenice’s luggage to consider for part of the trip, we decided instead to take Hellen’s SUV, a smart move as it turned out, since Jenice brought not one but two pieces of luggage, not to mention the fact that we would be coming home with more stuff than we took. The time for the creative packing had come. We wedged rocks in all the available nooks and crannies of that vehicle and even sacrificed the one big rock Darcy found that resembled raw meat, leaving it as a marker at our cabin with the plan to bring it home next year. Hmm, there’s that next year thing again. Of course, someone with a trained eye for cool rocks is liable to gather it up before I can make it back up there, but I had  no choice- Jenice wasn’t willing to leave one of her bags behind to leave room for the big rock. The trays of cactus were the last thing to go in, safely snuggled in among everything else so as not to be squashed or slide into our laps during transit. 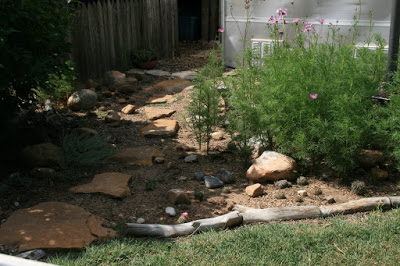 The Wyoming bed this year, with the new rocks and cactus added.

Now fast forward to Muleshoe, where summer had arrived with a vengeance. Considering we had enjoyed 60 and 70 degree weather for the past five days, coming home to 100 degrees was a shock to our systems, not to mention the rude welcome it dumped on the little plants from the north. The next day I managed to get every cactus and wildflower in the ground, every rock strategically settled amongst the plants. I have no doubts the cactus will do fine. The little wildflowers and all, well, I’m not so sure about them. The heat and dryness, I’m afraid, have already done damage, and I fear they won’t make it.  Next year, if I do go again next year, I will  leave the wildflowers alone and concentrate on a few more cactus and a few more distinctive rocks.

But the bed is looking good. I can’t wait till next Spring when they will all be blooming, and Wyoming come to Muleshoe will look like a blanket of pink.