Leal’s Mexican Restaurant is one of  Muleshoe’s main claims to fame, a busy little place that started out as a convenient stop on the east end of American Boulevard in the 50s for green-card holding braceros to grab lunch, became a meeting place for the men in the community, later moved to the west end of American Boulevard to become a favorite family dining destination, and since the early 90s has been a Muleshoe staple in its present location at 1010 West American Boulevard. Leal’s is as much as place to eat as a place to see and be seen. Kids home from college or people who have moved away and come back for a visit know the best way to renew friendships is go have a meal at Leal’s. After church the wait for a table can be as long as an hour.

Jesse and Irma Leal are the reason a Leal’s exists, but Jesse Leal is also the star of  a few choice Muleshoe stories. Jesse’s love of poker and his high stakes games were legend and the infamous freezer story was one of the first stories I heard when we moved here. It seems he was in the habit of storing his winnings in the family freezer, not wanting to trust the bank with his winnings, which might also give a hint as to how much he had won or lost, I suppose. Seems that one day Irma was cleaning out the freezer of old packages ruined by freezer burn or no longer identifiable, when she came across a package covered in foil and unlabeled. Being unlabeled, it stood to reason it was probably also old enough to be of no value anymore, and being the efficient housekeeper that she was, out it went. At some point Jesse came to retrieve his loot, no doubt to use as stakes for yet another card game, only to discover it was gone. The amount has never been verified, but probably about $1500 was thrown away in the interest of a clean freezer, a tidy sum of money, then or now.

One night word got out a high stakes game was going to be held in a Clovis motel room. All of a sudden these guys kicked the door down and came in with big guns and announced, “This is a robbery, everybody stand up, put the rest of your money on the table.” They scooped it up and off they went with what they thought was all of the money. After Jesse and his fellow victims settled down to appreciate the fact they got off with their lives and also realized that calling the police was pointless-they were doing something a bit illegal themselves, after all!-breakfast seemed to be in order, so off they went to eat. It was only after they had eaten that it hit them-they were all broke! Or were they? Jesse taught them a valuable lesson for future games-never put all your money in the same pocket, and he bought breakfast.

Another Clovis game Jesse attended was also raided, but by the police. Just like in the movies, the orders were to spread ’em, hands against the wall. The police did their business, the players went home, and all was well, until the next morning when the Clovis paper came out with headlines and a picture, sans names, about the poker game raided the night before. Everything would have been fine, except that Jesse’s right index finger shortened as a child cutting firewood gave him away…

Jim Young tells the story about a friend who carried his uncle’s honorary Texas Ranger badge. They paid a visit one day when Jesse happened to be in the shower. They decided to look in on him anyway, barged into the bathroom, flipped that badge over the shower curtain, and said the Rangers needed to talk to him. Jesse was sure his gambling was about to be his undoing.

In the early days of Leal’s food career a certain prominent Muleshoe VIP  also held poker games, and  he asked Jesse to deliver snacks to those games. Jesse always joked that he knew had arrived in Muleshoe when they eventually invited him to play with them. He gathered his bankroll and looked forward to his first game with them, only to discover that it was a friendly game of penny ante and quarter bets, a little different to what he was used to.

Jesse Leal served two years in the army in Korea where poker helped pass the time. While poker gave him great pleasure, it never ran his life. The funny stories center on his poker playing, but his real contribution on the Muleshoe community came from his attitude and work ethic. He followed a potato broker from the Valley up here and worked with Barrett Produce as a bookkeeper before Irma’s idea to open a tortilla factory eventually led to the idea of opening a restaurant in 1957. He came here to build a life, to fit in, to raise a family, and he did. He and Irma had six children who carry on his legacy. People who knew him will tell you that he didn’t come here with a chip on  his shoulder, that he never played the race card, and never expected special treatment. He always gave people the benefit of the doubt, loaned money with no strings attached to those who found themselves in temporary economic straits, was a benefactor in many community endeavors, and always had a kind word and a smile.  It was the right thing to do.

One last story has nothing to do with poker. Wilcy Moore’s mother, Sammie Moore,  used to love to eat at Leal’s on Wednesday evenings. When Wilcy and his wife Mary would pull up in front of the restaurant, Jesse would be there to help her in and seat her, even though Wilcy and Mary were there to help her. Jesse didn’t have to help; he wanted to help.

With his ever-present flyswatter and never-ending supply of napkins, Jesse Leal enjoyed sitting down and visiting with customers, making them feel special and welcome in his establishment. Poker didn’t define him; his desire to be a good citizen, business man, and family man did. 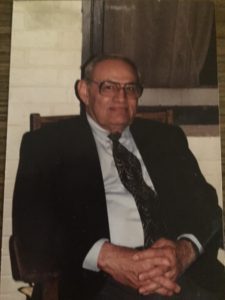 Photo courtesy of the Leal Family.

Thanks for playing the winning hand in Muleshoe, Jesse.