I don’t know about your spring cleaning procedures, but in my house spring cleaning is erratic at best, non-existent more often than not. Which is not to say I have a dirty house; it may not be the cleanest every single day,  but it is certainly not the dirtiest. Let’s just say it is cleaned on a need-to-clean basis. I have a kitchen magnet that says Dull Women Have Immaculate Houses – and I’d add probably a housekeeper! So that’s my excuse. Living on a dirt road doesn’t help any. That having been said, cleaning the ice box has never been a regular chore for me.

And yes, I know, technically it’s a refrigerator, but I still call it an ice box because that is what my daddy called it, so that’s what I grew up calling it.  At any rate, ours has been with us for thirty years. It was new when we moved it into this house when we built it in 1981. So when it quit cooling and freezing the other day,  instead of just hauling it to the dump and starting over, we cleaned it out and took it to local electrician/fix-it man, Jack Dunham, who promptly diagnosed faulty defrost switch, replaced it, and we hauled that little ice box back to the house to look forward to another thirty or so years with our little almost-antique appliance.

And it’s clean! It’s kind of like cleaning the house before the cleaning lady gets there. We hated to take it to be fixed all spotty, and with all the food out, well, I’ll admit it, it needed a cleaning. So, even knowing we might be spiffing it up for its final ride to the land fill, we scrubbed  it up, and it looked just like new. Well, almost. But it looked really good. Certainly good enough to move it right back into its spot in the kitchen, now that it was working well again.

I’ll bet we are one of the few households that still enjoys its original almond-colored refrigerator with no water/ice dispenser in the door, no ice-maker in the freezer compartment and doing just fine without either, thank you very much. I plan on it outlasting us. 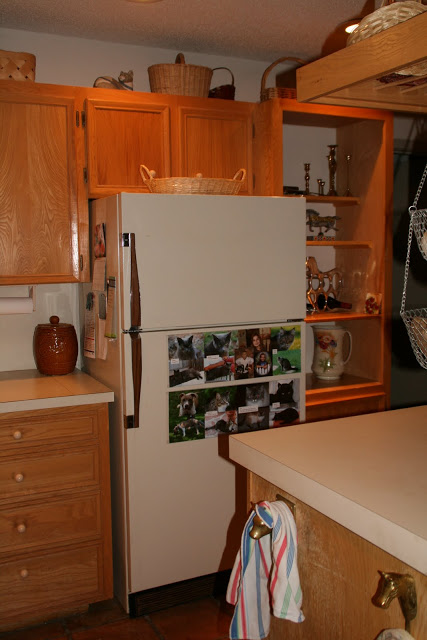 I also plan on cleaning it a bit more often…