Muleshoe’s Coach George Washington passed away Sunday at the age of 84 after living 52 years in Muleshoe and coaching and teaching for 28 years in Muleshoe, becoming a local legend along the way. Gilrobert Rennels at Gil Lamb Advertising/Channel 6 posted Coach’s obituary and some pictures on Facebook. The response was a tribute to the man who was  known as the biggest Muleshoe Mule fan on the planet, but his reputation was also made during his time as a teacher and coach at the high school. I read the comments in response to Gilrobert’s posting, and the recurring themes in his legacy were peppermint candy, his money-loaning service, and the ever-present paddle (which you apparently signed after your swat) as well as his devotion to Muleshoe sports. That devotion was the inspiration for the Legends Award, of which he was the first recipient, now given periodically to individuals who emulate that dedication to all Muleshoe sporting activities. 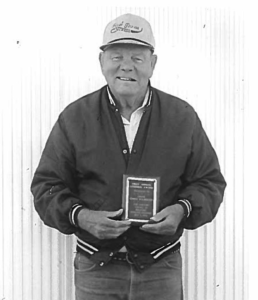 Sam Whalin just shared with me another side of George Washington. Coach expected kids to show up for his class with paper, pen, books, all that they needed for class that day. If students didn’t have something, they would have to rent a pencil. pen, book, whatever, and buy the piece of notebook paper. He also owned a Coke machine in the gym and took care of keeping it full and working. People accused him of making lots of money from all this, but what people don’t know is that he had no P.E. budget and would use that money to buy balls and supplies for his class. What people also don’t know is that sometime after he retired, he went to Al Bishop, who was high school principal at the time, and offered to use that money, which he had kept in a separate bank account and was reputed to be several thousand dollars, to carpet some classrooms and do other things to improve the high school.

My own kids also borrowed money from him from time to time and laughed about how he never failed to follow up to get his loan back-with interest. Not a bad way to teach kids  responsibility with money. His reputation as a loan officer was so great that when he retired from Muleshoe ISD, his retirement plaque closed with the statement, “The bank is closed.”
Indeed. We all should live a life so well.
What follows is just a sampling of the farewell comments to this man who touched so many lives:
Stacy McElroy Johnson- I have fond memories of him. RIP Coach.
Sharla Evins Reed- Coach Washington drove my school bus when I was in first grade. Loved getting on every morning despite the adventuresome driving I endured weekly! Sad to hear of his passing. He was a great man!
Jill Foster McCall -Coach Washington was always willing to stay after practice and help me through another “practice.” He taught me to believe in myself when no one else did.
Sandy Adair- When he subbed while I was teaching there, he always had candy in his pocket. At Christmas it was peppermint nougats, and I still hunt for them every Christmas! He was a fine gentleman!
Amanda Carpenter Clifton- He was such a staple in our community! He was MY mother’s bus driver and MY sub at times! He loved this community dearly and he will be missed!
Deanna Rasco- Think about all the hats he sold for the Booster Club.
Robin Evins Retz- He will be dearly missed! He’s a Muleshoe Legend!
Janell Garrett Hanlon- RIP Coach Washington! I will always picture you standing in the hall during class change, paddle in hand with a huge “just you try it, little girl” grin on your face. Thanks for caring about us all!
Scott Spies- I think my favorite memory of Coach Washington other than the bumpy rides to school on the bus, is him play Santa Claus at the old Sears store. My parents took me there and I asked them why Santa looked like coach.
Gary Wrinkle- I still to this day use a boot jack that Coach made and my mom bought from him for my birthday in seventh grade. I also remember him complimenting me on a play from a Friday night football game when I thought no one in the world really even watched. He was a character, and solid as a rock.
Karen Stickman- I loved my Swat with the paddle from Coach Washington! Loved writing my name on his board! Prayers are with the family.
Tammy Black- I cherish ALL of my memories of Coach. He drove my bus, made me cutting boards and a special paddle. My son dropped it down the incinerator after I paddled him with it. I think I’ll paddle my 26 year old son (with the cutting board since he tossed the paddle) in honor of Coach. I LOVE YOU COACH! See ya later!
Robert Nowlin-I rode the bus 13 for many years. Coach Washington was as fine a man as you will ever find. He whistled everywhere he went and treated everyone with respect, something he expected from you. I remember the night of our graduation, at the reception, I asked him if I could call him George yet. He said, “Only if you think you can get away from my paddle.”
Jane Calton Welch- What a terrific man! When I moved to Muleshoe, Coach was such a help with my girls! He coached them when the coaches didn’t have the time or effort! Made a real difference in our lives and always had a peppermint taffy for me and a big smile!
Magann Rennels- My daddy’s favorite story about George Washington was when Coach first came to MHS and you had to talk to a long distance telephone operator to call out of town. One time he placed a person to person call to Morton from George Washington to John Paul Jones at Morton. The operator thought it was a joke. It was the truth. John Paul Jones was the Morton High School coach.
Courtney Brown Ware- I remember Coach Washington being generous when lending money, but happily charging a quarter for interest and then “harassing“ the student with “Navejar, where’s my quarter?” He was bigger than life and will be greatly missed!
My thanks to Lynda Washington for sharing this picture of her father-in-law with me for the story and to Gilrobert Rennels and Channel 6/Gil Lamb Advertising for sharing the comments posted on their website.