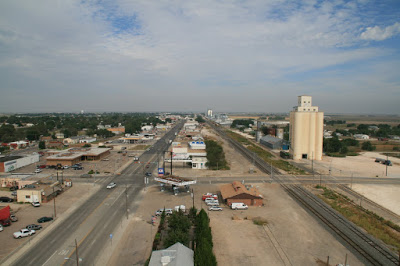 Any grain producing area will have grain elevators. Since we have lots of land in production and traditionally  grow lots of wheat, corn, and milo, every little West Texas farming town has a skyline that includes one or three or so grain elevators where the grain is stored after harvest until it is sold. Tall buildings plopped down on top of vast expanses of flat land means that these elevators are prominent on the landscape and come into view long before crossing into the city limits.

I understand that early elevators were called  prairie cathedrals. I like this story better: My friend Elaine Bowman, who works for an oil-related company in Houston, came to Amarillo on a business trip. She was accompanied by a co-worker, very much an urban dweller, who was not impressed with our wide-open spaces, probably wouldn’t recognize a grain elevator for what it is at the Houston Ship Channel,  and was aghast at what he saw as desolation and isolation until in the distance he spied a structure looming on the horizon. “Finally!” he brightened up, “Civilization at last. I see condos coming up in front of us.” I don’t remember how Elaine broke it to him that what he was seeing had nothing to do with high rise living accomodations.

Then there was  the man from the Austin area who had to ask if that big building on the highway in Muleshoe was a cotton gin or a grain elevator. There is a world of difference in those two mainstays of agricultural life, so I made sure he was treated to a tour of each.

But I also need to share Joe Bob Stevenson’s story about the time he attended a grain convention, also in Amarillo, and struck up a conversation with a sweet young thing in the hotel lobby (this, of course, before he was married) who asked him what he did for a living. They were at a grain convention, right, so all he said was that he ran an elevator-which he did, for King Grain in Muleshoe, thinking she would make the connection-to which she replied, “Doesn’t it get boring just riding up and down all day?”

So now fast forward a year or two, and I am on my way to a national Gifted/Talented convention for teachers in New Orleans. The first afternoon I had some time to see the city before the meetings started, so I signed up for a Gray Line bus tour of historical sites. Three men boarded the bus and two of them sat across from me. The third one asked if the empty seat by me was taken, which is wasn’t, and I of course offered it to him. We introducted ourselves and established that he was from North Carolina and I was from Texas, and I asked what brought him to town. He said he and his friends were there for an elevator convention. With Joe Bob’s story lurking in my memory, I launched into a discussion of crops and blathered on about elevators and agriculture and I forget what else while he is looking at me with a blank expression on his face. When I ask him about crops in his part of the world, he pauses slightly, and says, “You don’t understand. I run a regular elevator.”

After that I let him initiate the conversation topics. He already thought my elevator didn’t go all the way to the top; I saw no need to make it worse. 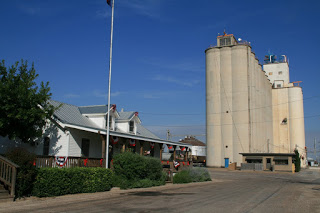 The first picture was taken looking west from the top of this elevator which is right on highway 84 going through Muleshoe. The building to the left is the Chamber of Commerce office.