Invasion of the Cute Little Dinosaurs 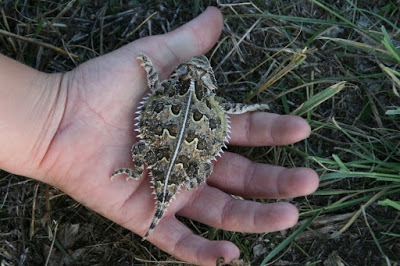 Why the decrease in population? Well, there are several reasons. Horned lizards eat red harvester ants. Imported fire ants drive away the harvester ants, and the lizards won’t eat the imported fire ants. So that hurts them. But just plain old civilization has caused a loss of habitat for the little critters as well. And then of course, trying to keep them as pets and doing mean things to them doesn’t help either.

This year I saw a bumper crop of four newborn horny toads, which may not sound like a big deal to you, but it is. Most years I don’t see any little ones, so this is major. And they are soooo cute! And tiny. Which may be why I don’t see many-they are so bloomin’ hard to see. Counting them all, I saw eleven lizards this year, a record number for me, as I recall. I went out more than the required three times, but I didn’t see one every time I went looking. But eleven is a good number.